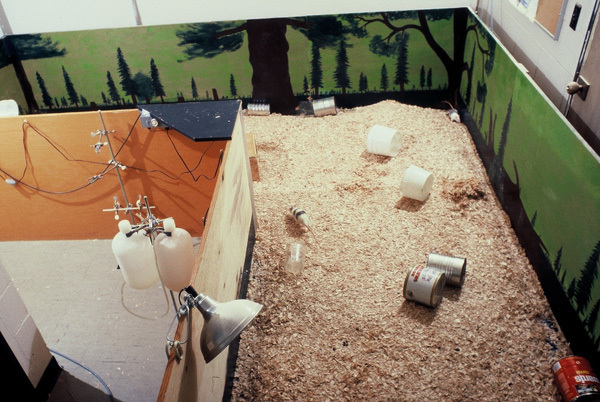 We all learned this in DARE class. About the rats in a cage who can self-administer morphine who get addicted to the stuff, and then just hit that lever until they die. A seemingly keystone argument in the war against drugs. Professor Avram Goldstein, the creator of that study, has said: "A rat addicted to heroin is not rebelling against society, is not a victim of socioeconomic circumstances, is not a product of a dysfunctional family, and is not a criminal. The rat's behavior is simply controlled by the action of heroin (actually morphine, to which heroin is converted in the body) on its brain." So, it's the drug, and its addictive control. Surely we must eradicate drugs as a result!

But there's another model out there by researcher Bruce Alexander of Simon Fraser University called Rat Park, from 1978. From that wikipedia page:

Alexander's hypothesis was that drugs do not cause addiction, and that the apparent addiction to opiate drugs commonly observed in laboratory rats exposed to it is attributable to their living conditions, and not to any addictive property of the drug itself. He told the Canadian Senate in 2001 that prior experiments in which laboratory rats were kept isolated in cramped metal cages, tethered to a self-injection apparatus, show only that "severely distressed animals, like severely distressed people, will relieve their distress pharmacologically if they can."

To test his hypothesis, Alexander built Rat Park, an 8.8 m2 (95 sq ft) housing colony, 200 times the square footage of a standard laboratory cage. There were 16–20 rats of both sexes in residence, an abundance of food, balls and wheels for play, and enough space for mating and raising litters. The results of the experiment appeared to support his hypothesis. Rats who had been forced to consume morphine hydrochloride for 57 consecutive days were brought to Rat Park and given a choice between plain tap water and water laced with morphine. For the most part, they chose the plain water. "Nothing that we tried," Alexander wrote, "... produced anything that looked like addiction in rats that were housed in a reasonably normal environment." Control groups of rats isolated in small cages consumed much more morphine in this and several subsequent experiments.

And so rats that are born into extreme conditions in small cages are clearly more likely to self-medicate. Tom Stafford of the BBC writes:

The results are catastrophic for the simplistic idea that one use of a drug inevitably hooks the user by rewiring their brain. When Alexander's rats were given something better to do than sit in a bare cage they turned their noses up at morphine because they preferred playing with their friends and exploring their surroundings to getting high.

Further support for his emphasis on living conditions came from another set of tests his team carried out in which rats brought up in ordinary cages were forced to consume morphine for 57 days in a row. If anything should create the conditions for chemical rewiring of their brains, this should be it. But once these rats were moved to Rat Park they chose water over morphine when given the choice, although they did exhibit some minor withdrawal symptoms.

You can read more about Rat Park in the original scientific report. A good summary is in this comic by Stuart McMillen.

So, if Rat Park is to be believed, drug addiction is a situation that arises from poor socioeconomic conditions. From literally being a rat in a cage. If you're a rat in a park, you'd rather hang out with your friends and explore the world around you.
Perhaps it's time the war on drugs becomes a war on the existence of poverty? (edit: Poverty of our relationships to family, community, and nation too, not merely monetary. As commenters have pointed out, there are plenty of people who have plenty of money who may well be the most poverty-ridden in other respects.)
It's not about the drugs. It's about the social environment in which we live.
views